There are lots of things in life that bring me fear. A rather anxious soul, the threshold seems accessibly low and the list of triggers is always growing. All the obvious prompts are there: spiders, heights…and the undeniably loud creaks and clacks the fridge decides to chortle out late at night when I’m on my own. That moment too, when I think I have full grasp of the pavement but then an icy patch reveals its full capacity under my unwitting shoe and I almost slip, only to recover in a split second.

As the years have passed, more and more fears have made it onto my list. Tripping over doors for example – which was recently demonstrated to me through my own ungainliness – has been added and passes through my mind every time I stroll out the house.

But more specifically, a good number of my concerns, I noticed, were talking related. Speaking to new people, not saying enough, talking too much or saying the wrong thing.

I got invited to a networking event a few years ago and found myself sat frozen in my Toyota Yaris, unable to even make it through the door. It was an issue I had come to accept – even if it made me unhappy – more because it was something I felt I couldn’t change – until now, of course.

Originally from the UK, I moved to Ireland around three years ago.

“For Vox Pop Dublin Toastmasters?” I hear you ask! Well, not primarily… my boyfriend is Irish and I made the leap across the Irish sea – cunningly by plane – to start a new life here on the Emerald Isle.

Lots of hurdles were thrown my way – as they would be for anyone moving to a new country, however near or far. Finding a place to live for one, navigating the local public transport was next…also discovering that trying to get down Grafton Street on 24th December with a large suitcase is less than optimal. Particularly when Bono has decided to rock up for an impromptu concert outside the The Gaiety – lesson officially learned.

But new, talking related hurdles were also thrown my way. Speaking to new work colleagues, meeting new housemates and meeting new friends at all the various groups I had decided to launch myself into. After several months I felt like the words “Hello, my name is Susie. And what is it that you do?” were permanently on repeat.

I was ever so nervous and as the events got bigger, my voice got smaller.

Of course, it was then that the pandemic hit and the little experience I had built up soon dissipated and I was back to my default mode of shyly anxious – or is that anxiously shy? Either way…

The months passed and as the world started to slowly unfurl, I was back on my Meetup app, thumbing my way through the groups.

There it was: Vox Populi Toastmasters Dublin. I’d heard of Toastmasters before and knew it was an established organisation and was interested to see what this group had in store. Temporarily online, I joined a Zoom call for my first meeting and even had a go at fumbling my way through a table topic. Words chaotically fell out of my mouth and I think I managed to chat nonsense for no more than 30 seconds before saying a hot faced “Thank you everyone” while quickly pressing the mute button.

To my surprise and delight, my attempt was immediately met by a sea of smiles and clapping hands as everyone welcomed and encouraged my bravery. I was both astounded and elated.

You see, fear has always been a part of me, part of my makeup maybe. But in that moment, it felt like a tiny hole had appeared. That inescapable box that I had been living my whole life in was edged open – just a small amount – but it was there.

It also made me realise fear’s potential for joy. The immense happiness that comes from embracing a fear that has always been by your side and overcoming it little by little.

As the weeks and months followed, I persisted and after becoming a fully fledged member, even joined the committee for our wonderful group.

Each session, I get up to speak and have even written a few speeches. The success of my improvised speaking still wavers. Sometimes I manage to tell a little story and sometimes I don’t but that’s ok. The warmth I get from Vox Pop is everything I need to keep trying.

And there you have it, that’s why I joined – and also why I stayed. 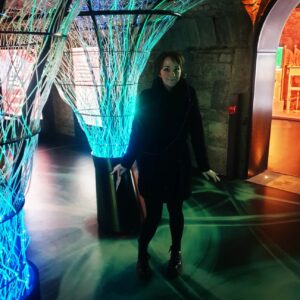 Finding my feet, voice and good friends – by Susie Kelly