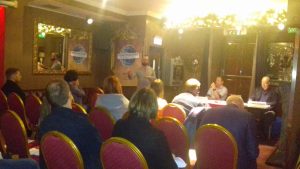 A table quiz in our usual room moved the meeting to the cosy Black Door venue, downstairs at the Harcourt Hotel. So comfortable it was indeed that somebody suggested that we hide there and emerge on Friday night for some dancing. I can’t say I wasn’t tempted!

There was clever guidance from Gemma the Topicsmaster. Her tip for speaking impromptu and handling random questions thrown at you is to do as politicians do, to divert off topic. Not a bad idea.

The topics session covered a wide range of random subjects – from pop idols and dining preferences, to the housing crisis and Brexit. Members and guests also mused over their most difficult exam memories, with the driving test getting more than one mention. The festive atmosphere was strong, as toastmasters divulged what they wanted for Christmas, and shared favourite Christmas memories. Honourable mention here for Conor who enjoys listening to Wham songs while putting up the Christmas tree. Gerry had his festive joke: What did Adam say on the day before Christmas? It’s Christmas Eve!

After the break, Bo spoke for the Open Mic session, which was a thought- provoking and well researched piece on slavery. We hope to hear more from Bo about this subject one day in the form of a speech.

There were two speeches. Richard captivated the audience with a speech on the second part of his astonishing 5 month travel adventure driving through 16 countries from Perth in Australia to Perth in Scotland. It involved a 32 hour queue at the border of Mongolia and Russia, for which he recommended bring camping gear, plenty of dry food and a book or two. More details and photos from this magnificent trip can be found on their website or on Facebook & Instagram: https://www.perthtoperthramble.com.

The second speech was from Gerry, who had wise words to share about handling passive aggressiveness and the silent treatment. He suggests that this behaviour should be recognised and do not take it lying down. He made a call to see the good and bad in every situation and gave the insightful advice that the best way to get rid of the black dog is to feed the white dog. Definitely words to remember.

Prizes were awarded to the best topic, best speech evaluator and a special prize to the timer John for the most frequent use of the word of the day “joyful”.

Our next meeting is 7pm Wednesday 19th December in the Harcourt Hotel, Dublin 2. This is our last meeting of 2018, so we are celebrating with some drinks and finger food after the meeting. Hope you can join us then!