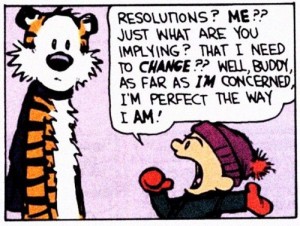 So here it is, the future. Just one month ago life was one long Christmas party about to kick off, a  glorious free-for-all of happy hedonism. Tottering home in tinsel at four was the norm as was breakfasting on After-Eights.  ‘Adulthood be damned!’ you proclaimed, guzzling the champers, ‘I wanna be free!’ And how wonderfully evolved you were not to care as you clocked up more debt than a Third World Country and oozed out like jelly over your jeans. ‘New year, new me’, you said secretly hoping tomorrow would never come, but now here it is, January,  and you can just about roll out of bed to find a pen and list your way to a better you.

But why do people bother with New Year’s Resolutions? Do they even work and how much happiness do we ever find in changing anything?

NYRs just don’t stick according to Forbes magazine. Studies reveal that only 8% of people succeed in keeping them and a whopping 75% of people last only one week. Psychology professor Peter Herman of Carleton University in Canada has identified one reason for failure as the “false hope syndrome” i.e people set unrealistic goals.  Another reason is that goals set are too vague and too numerous. Better to set just  one or two specific ones. And a third very common reason for failure is that some people are simply not ready to change. Just because it’s the first of January does not mean that you are ready to stick to the grey, gruesome grind of a new routine. Especially if that routine involves cutting out carbs, sugar and cigarettes – staples surely??

So, time to bin goal-setting then? No. According to Maureen Gaffney, eminent Irish psychologist and author of “Flourishing”, we are hard-wired to set goals and find happiness through achieving them.  Good news for the box tickers! However, it matters what areas you set goals  in. Achieving an increase in salary of eight thousand euro results in only a two percent increase in happiness, whereas hanging out with a happy friend results in a whopping FIFTEEN percent increase. Finding that soulmate, having children, having enough money – these all increase your happiness levels, but only by a mere ten percent.  It’s not very much when you consider how much effort you put into these areas of your life.

What is much more likely to make you happy is how you think about yourself, what you pay attention to, what daily activities you choose and yes, the kind of goals you set. In other words, goal setting makes you happy BUT only if you enjoy the process, value your input and see yourself as a success throughout. The latter point is the most important – how you value and perceive your success is more important than how others value it.

This is why so many of us leave Vox Populi meetings feeling happier – the club values participation over box-ticking. The culture is to support and appreciate just giving it a go – not on whether a certain standard is achieved. (I personally believe there is happiness to be felt in aiming for higher standards, but not at the cost of devaluing people. ) Research shows that achieving goals in an atmosphere of friendship and fun gives the greatest happiness return on investment. As individuals, we tend to be self -critical. But being part of an encouraging group can hugely temper such inclinations.

So don’t throw the pen and pad away – goal setting WILL make you happier. If you want to be a better communicator then signing up for grammarian or timer will give you a sense of meaningful achievement, especially with the rest of us cheering you on:). Looking forward to seeing more of you all in the New Year, to setting goals, ticking boxes and cutting back on the chocolate breakfasts.