Summertime and the living’ is easy… 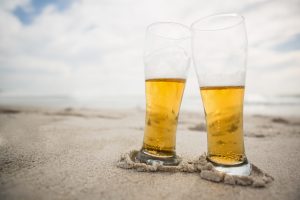 Jubilant! I smiled instantly when I read the word that Brian Killeen, the grammarian, was hanging visibly on some walls. The perfect word to describe how I was feeling… This was going to be the first time that I would be taking the role of Topics master in the club, as well as delivering my Ice Breaker.

I was mentally adding ‘(and anxious)’ in those papers when Patrick, as Toastmaster of the Day, brought down the gavel. Impressive! I wouldn’t have expected so much attendance considering that at the same time the Football World Cup was taking place, still most of the chairs were taken by the club members and two guests that were visiting us. Yes, Toastmasters 1, Football 0!!!

But the World Cup enthusiasm is infectious, and Fergal while explaining his role as Timer shared his sympathy for Iceland, so comparable to Ireland in name and size, what made him willing to shout for our Atlantic neighbours. Brian Killeen encouraged everyone to use the word of the day while confessing that what he wanted was a Samba party in Dublin, so he would shout for Brazil.

I was then introduced as the Topics master, and as I regretted that Ireland would not be taking part on the competition, I would then support my homeland Spain, that was playing against Morocco at that time.

As the last meeting was happening in a yet another week of sunshine, followed by the Vox Populi barbecue night that Saturday, I thought: “Yeah, the theme summer! And as I started asking for a plan B in case it would suddenly rain during a barbecue, Gerry convinced us not to go for a plan B as he learned from his father, and explained how to keep going with it even if it rains.

Summer evokes memories of those first jobs during the high school or university midyear breaks. So, what was the first summer job? What funny stories do we remember? And… would you apply for unusual (and real) jobs, like water slide tester or mattress jumper? Fergal was sure he could do well being a professional apologizer, so he proved his skills in apologising during the speech, while Dan took the challenge of the parmesan cheese listener job, showing a great sense of humour while trying to figure out how someone can really have such a job.

And thinking of better ways to travel in the city during these sunny days, a steer-wheeled trolley would be very useful and quick in a steep street down city centre, and a tank very effective to move steadily, the best to address traffic jams… for oneself!

In the last part of the topics, it seems we would break a law if we had to save someone. Not any law, mister policeman that are reading this! And Fergal had very clear in his mind that if I would be giving out to him 1 million euro, he would be visiting the United States with a big plan involving Coca-Cola that would make him, I would say, famous. Maybe it was better to keep that million in my bank, at this stage… Or maybe I should give it to Stefania, one of our guests who, to change the world, would put her passion into protecting the environment. I found her very inspiring, and gratifyingly surprised with her confidence as I learned later that this had been the first time in Toastmasters and also a Table topics.

Patrick closed the first part with the Open Mic, which was followed by the mid-session break. For me time passed very quickly, as my attention was in reviewing my speech and fighting the nerves breathing deeply, trying to keep calmed. I was the first one starting with my Ice Breaker in the new Pathways, bringing one my favourite comics and going through my experience of becoming a comic lover and book reader, then a library addict, and end discovering my passion for writing when I was thirteen. And I shared my secret wish: having a book written by me in my hometown library, that welcoming place that became my temple.

Oliver was the second speaker. Born and raised in Germany, he wanted to share his experiences and view of a sensitive topic, and still a taboo: should himself and Germans nowadays feel guilty for what happened in the 40s with the Nazism and the II World War? He made my hair stand on end, and I was absorbed by an exposition so personal and touching, in a clear calmed tone, I’d dare to say contained but with the passion that I would expect from someone that has had to answer this same question so many times.

And Mark made us look up into the stars in the third speech, when he presented technical content related to astronomy as a very engaging trip into the universe and the Big Bang, reminding us that at the end we are all made of stardust. I wished my science teachers would have been so expressive with their hands and made such a presentation, maybe I would be in the International Space Station instead of working with computers here on Earth.

The speech times were shared by Fergal, and Dan, Kieran and Merrilyn shared their evaluations of each of the assigned speeches, followed by Fergal with his notes for their recorded times as well. Brian, as grammarian, shared the most remarkable expressions from all speeches, and Richard as Ah-Counter, reminded us how much it helps to stop and close the mouth doing a short break before continuing. Good one, I was taking good note of it!

Deirdre was impressive with a very detailed general evaluations, a true learning experience. I have always found a very difficult role that requires experience and lots of attention, so I really enjoyed how she was highlight to each and every participant the strengths observed and any improvement challenges. Every minute used was worth it, thank you Deirdre!

As the end was approaching, it was time for the recognitions. For the Table topics it was me to choose, so the Best Table topics prize went to Stefania, for her courage in speaking up for the first time and defending that the people had to become greener and more respectful of the world. It was not a one million euro cheque to fund such a project, but a symbolic and irresistible chocolate treat. Patrick then expressed thanks to everyone involved in the club for an amazing year accomplished, and recognized the hard work and dedication of Gerry as president of the club. Well-deserved Gerry, the big round of applause was really heartfelt.

And thanks for having organized the lovely barbecue, we would have gone even if it had rained instead of having had that great sunshine evening. Never a plan B anymore!

Enjoy the Summer, fellow Toastmasters, and see you in September for more jubilant joy!